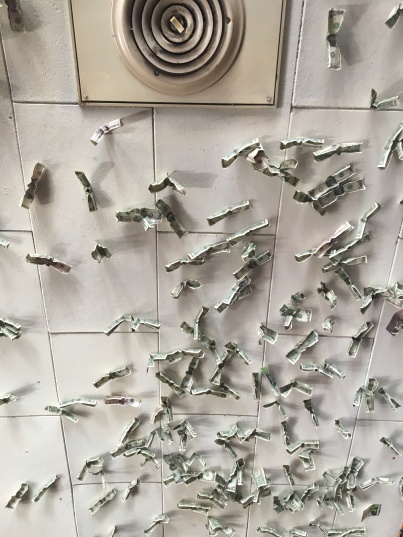 the high ceiling at husby’s invited some creative decorating.  twenty years ago, at some point in time after their renovation, the staff and clientele starting throwing money at the ceiling tiles.  there are specific instructions for this, which include tacks and quarters and precise folding, but the end result is a ceiling full of paper currency – a virtual piggy bank of resources that are donated to local causes in sister bay, wisconsin.  seeing the bills on the ceiling and the posted list of good causes just makes you want to throw money.  encouraging others to throw money, continuing the twenty-year-old tradition is generosity.  it turns their vision out.

as the season of lent starts, many people will, for reasons they may not even be able to articulate, “give up” something, a sort of faux-fasting.  back in the day when i was a young teenager, and maybe even now, it was something of a contest…who could give up the most interesting thing, the hardest thing, the easiest thing, who could boast louder.  that all seems antithetical to the point.  way back, giving up lima beans would not count; giving up candy counted.  i haven’t often participated in this.  i’ve just tried, successfully and unsuccessfully, to moderate at all times.

yesterday or maybe the day before i saw a post about giving for this period of time.  in an effort to raise consciousness about austerity, the suggestion was made to each day give a THING away, something you do not use but someone else would value having, or something you know, even though you sometimes use it, would be vital for someone else.  that way, at the end of this period of 40 days there would be 40 THINGS that you have put aside to give away, a contribution to others who need the things you are easily (or actually not so easily) able to donate.  giving clothing or shoes or backpacks or kitchen gear or blankets, things that pare down your own concentric circles of stuff and grace another’s life with something he or she needs.  turning your vision out.

today i will take out two laundry baskets for us – as a start for this new practice.  this makes more sense to me than giving up candy.  as a personal practice in everyday life and honoring this life i was given, i should always be giving up anything in excess that isn’t good for me, lifestyle choices as opposed to a diet choice or a lent choice.  as a new ritual practice for these six weeks however, gathering things for others will illustrate how someone else might be benefited by my lent.  it’s not just about me.  it is turning my vision out.